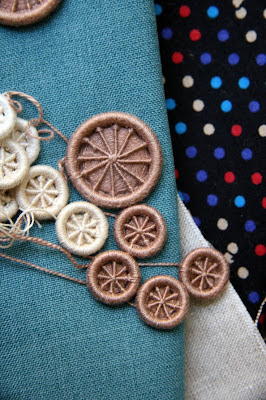 One of my love-of-craft minded friends is a dorset button maker. Fiona is based in Melbourne and sells her intricate buttons at Buttonmania in the city. Below is a little history of the dorset button Fiona has kindly put together.

Men, women and children worked in the industry. To meet the global demand for dorset buttons, prisons, orphanages and even prostitutes(!) were engaged to make buttons. In the mid 1850's the industry came to an abrupt end with the introduction of the automated button machine. Tragically hundreds of families lost their livelihood, villages were abandoned as people emigrated to Australia and Canada.

The buttons are pretty easy to make and the brass/metal or plastic rings can be got from Spotlight (from either the craft or the curtain section). You can pretty much use whatever thread you like but I have used mainly perle cotton (usually used for crochet- i think). Instructions on how to make them can be found at the following site.

Thank Fiona for sharing your love of the dorset button and for kindly loaning me your buttons to be photographed.

Aren't they so delicate and beautiful?
Prostitutes? What? Between customers? During customers?

Our studio used to be two doors up in the Nicholas Building.

I can't tell you how dangerous that was.

Oh they are just beautiful. I have never seen them before.
Also I have tagged you..hope that is ok, please have a look at my blog for details if you want to play along. Cheers Jogirl

Those are so beautiful. Thanks for sharing such beauty and some great links. I will have to make a point of visiting buttonmania soon.

Beautiful items, and so nice to hear about a lost art being revived.

They are so beautiful - I've just been reading a book that describes these buttons and main characters make them throughout the story! It is so wonderful to see them! Thank you! They are more beautiful in real life than my imagination!

What an incredible amount of work must go into them. Fiona, are you looking at getting your buttons out anywhere else or selling them online?

must be going there soon, it's been on the list for a while now. thanks for the reminder & lovely introduction to dorset buttons

I've been mildly intrigued by Fiona since reading a glowing reference to her in the book Handmade in Melbourne. Thanks for posting a little more info about her and a pic of the dorset buttons.

I love Dorset buttons, and these of Fiona are gorgeous !